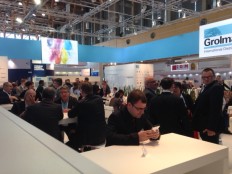 Cales de Llierca was present at the European Coatings Show 2015 (www.european-coatings-show.com/en/) as an exhibitor to show the products and services which the company offers.

Cales de Llierca is one of the leading European manufacturers of precipitated calcium carbonate (PCC), reason why it was present in Nuremberg (Germany) from April 21st to 23rd in the European Coatings Show, the reference trade show in the coating industry. This event is fundamental in the sector and all principal novelties are presented related to paints, coatings, sealants, adhesives, pigments and printing inks, construction chemical products, etc.

Prior to the beginning of the show the sector was gather in the previous congress. The schedule there was deal with topics such as the sustainability, the nanotechnology, the green coatings, the price increase or shortage of raw materials, as well as new applications of TiO2, among other principal trends that is driving the paint and costing industry.